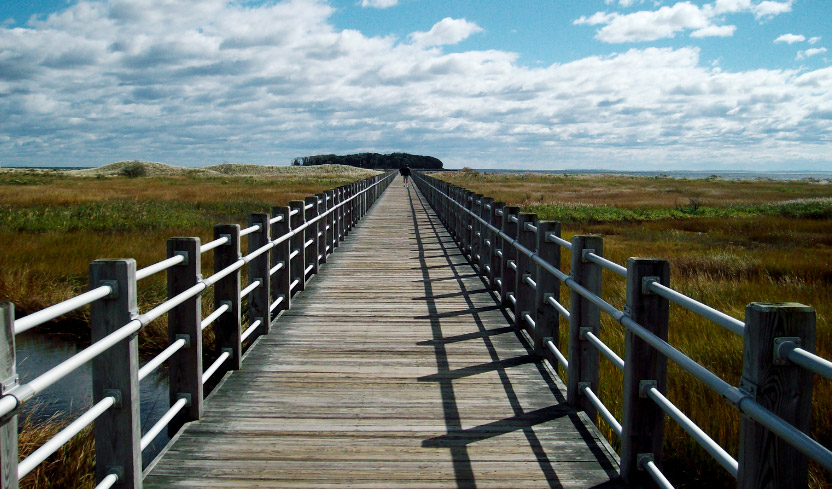 For this week’s story setting inspiration photo, let’s head back to Milford, CT. (What can I say? It would be a great place to set a story.)

The photo above was taken at Silver Sands State Park. What you’re looking at is a boardwalk connecting the park’s parking lot with its beach.

Those trees you can see in the distance? That’s Charles Island — the one I featured previously which is rumored to house Captain Kidd’s treasure, is only accessible by boat or crossing the sand bar / tombolo at low tide, and has its share of more recent deaths and other accidents tied to it.

What makes the boardwalk interesting in the sense of a story is the fact that it sits above a salt marsh. It’s also surprisingly long. Isolate someone mid-way, and they really have nowhere to go.

Given that this is a park, there are also hours when the park is closed (after sundown). At the same time, there’s nothing to actually stop someone from from getting onto the property. So, it’s not unrealistic to imagine a couple sneaking into the park late at night for some alone time on the beach, or less-than-brilliant types to decide to cross the tombolo to Charles Island during the late low tide (depending on the time of year).

So there’s plenty to work with even with a pretty narrow setting.

Those are just the first few genre-appropriate things that come to mind. But I don’t know. It feels more like a murder mystery setting to me — a good one-off kill+dump spot if you could avoid making it too messy.