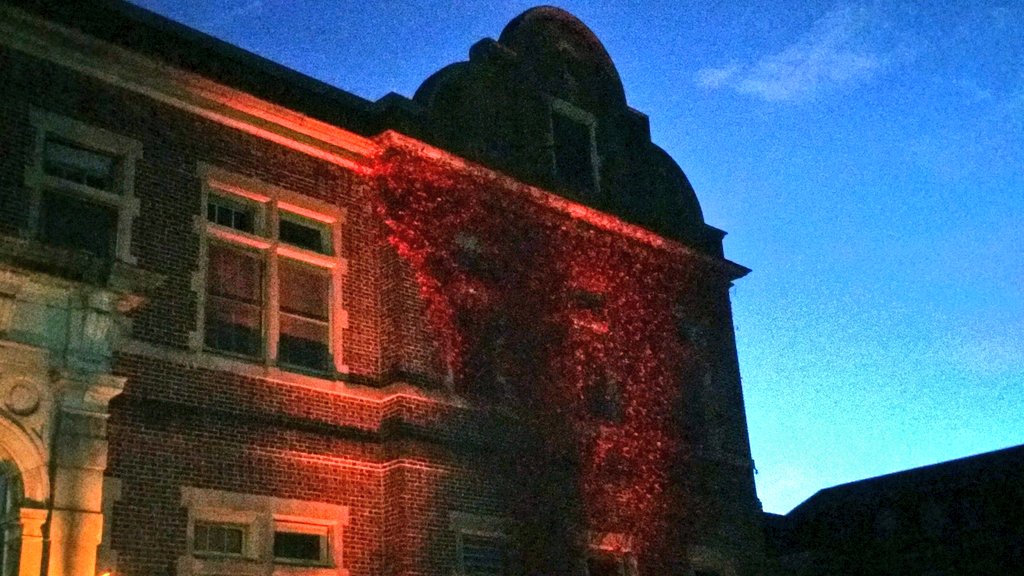 The past several Halloweens (my second favorite day of the year) I haven’t really done much to celebrate. So this year I decided to visit a rather famous haunted location I’ve been wanting to see for ages.

I’m not going to get into the “where” aspect and the history of it all here. But I did want to share some of my photos of this amazing place, including a few spooky ones from a ghost hunt visit to one of the old abandoned buildings. (Apologies for the fuzzy nature of some of the outdoor shots, but it was quite dark by the time most of them were taken.)

The first shot above showcases one of the old brick buildings on this former site of a mental hospital and school. Below you’ll find a few similar shots from the campus, including the old playground. 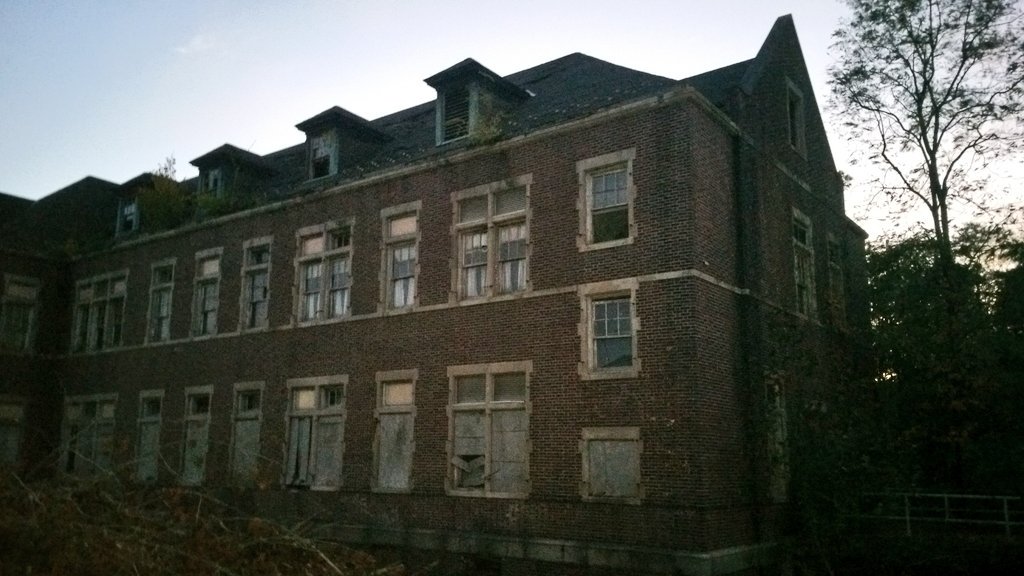 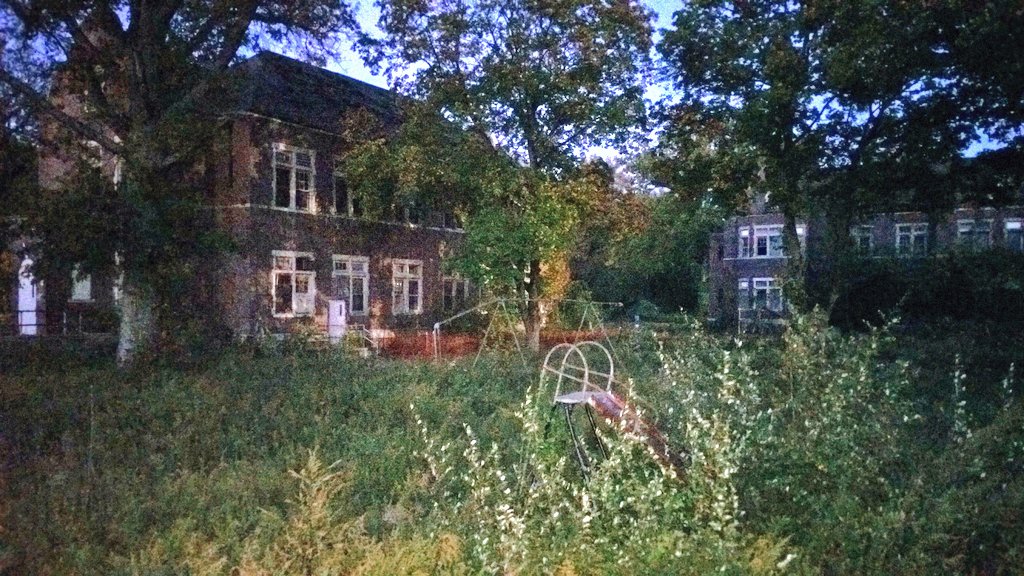 I’m already itching to go back just to see more of the campus itself. It’s an extraordinary, sprawling place, and it’s easy to see how somewhere like this could earn its haunted reputation.

Towards the end of my evening I visited one of the most reported haunted buildings, which used to serve as a dormitory for some of the children who were patients and residents here. Here are a few photos from inside: 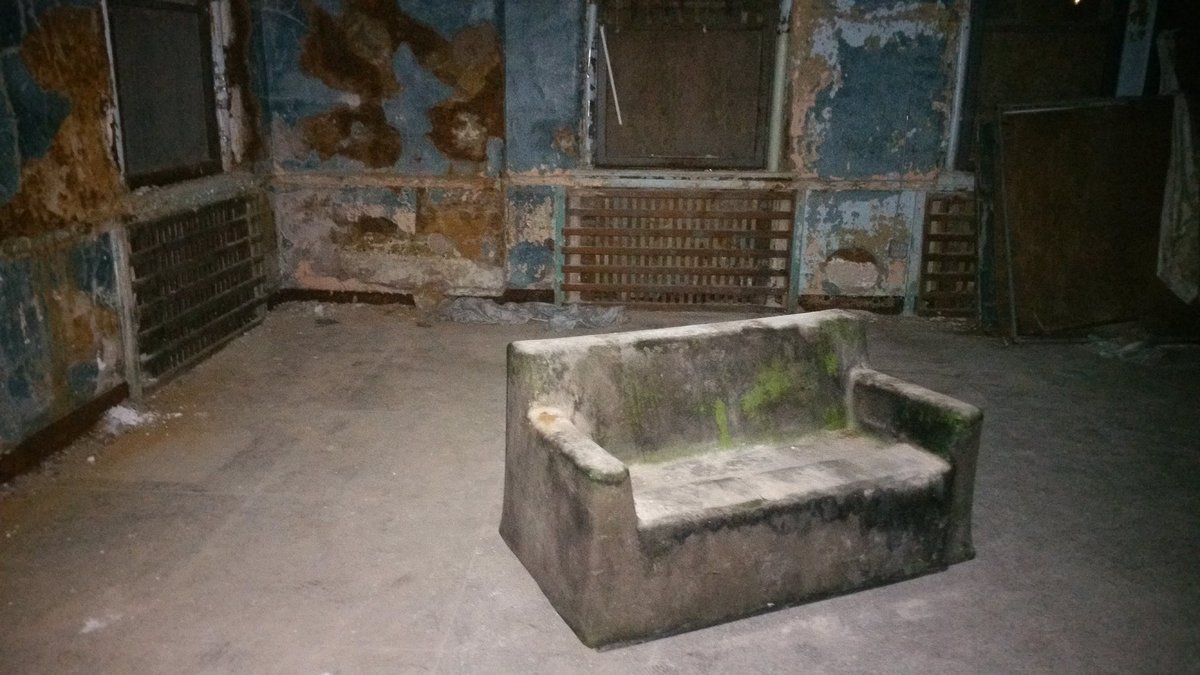 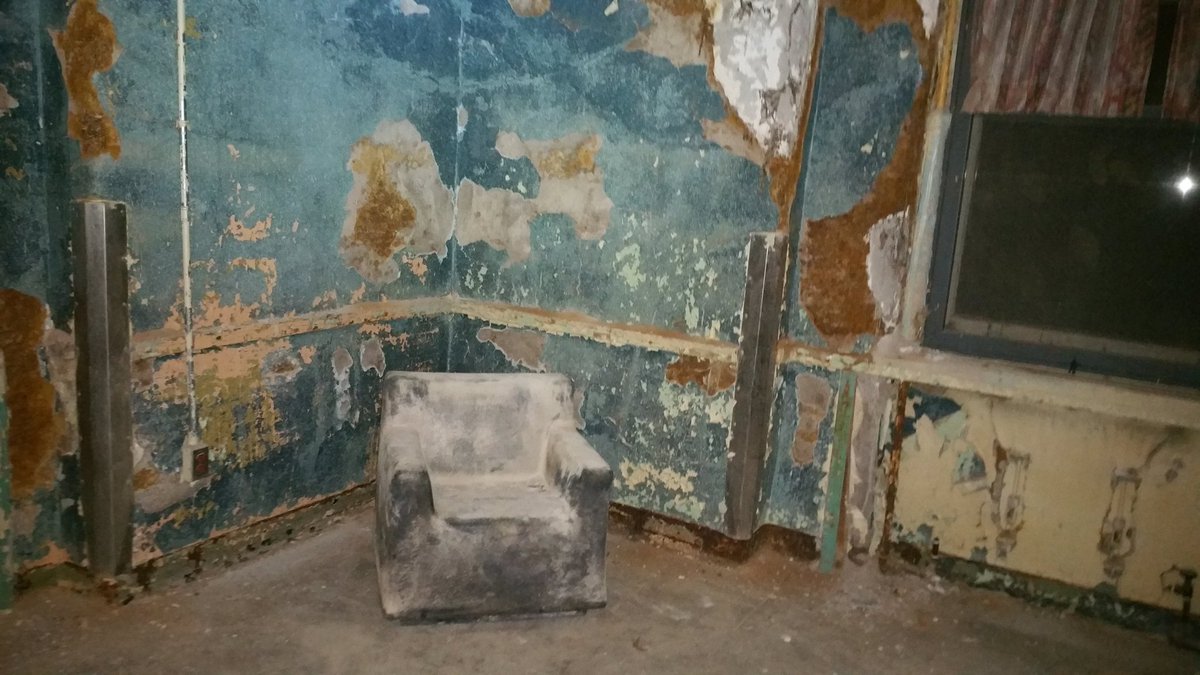 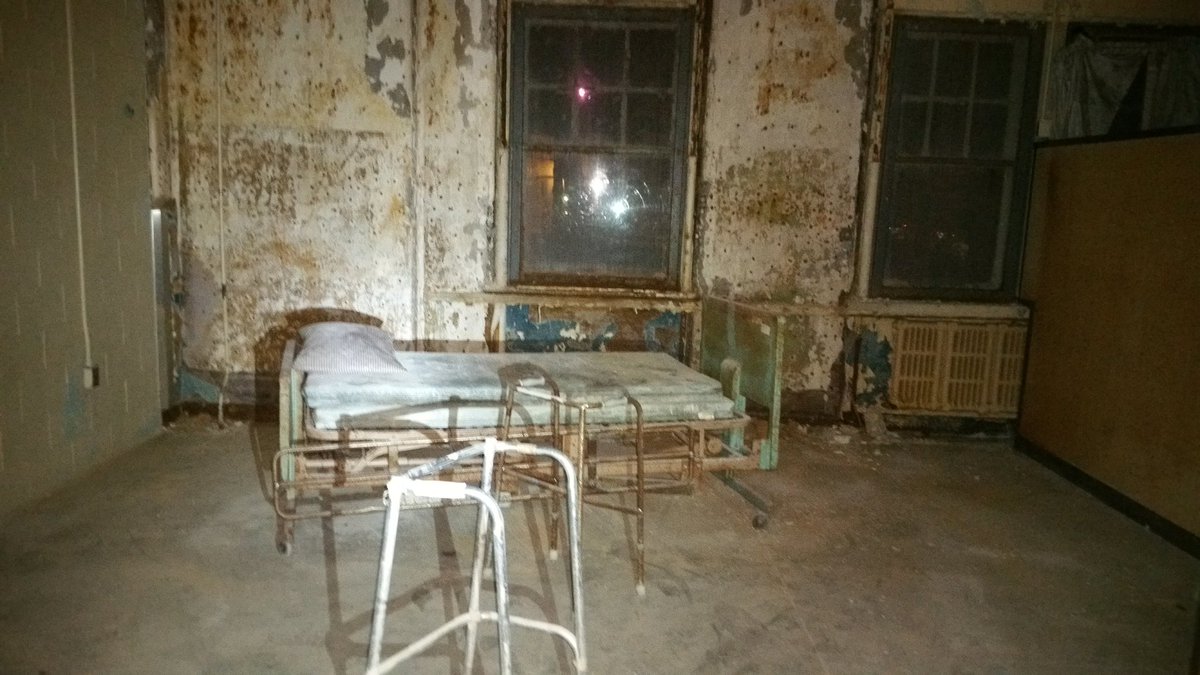 While those photos turned out pretty well light-wise thanks to flashlights and my camera’s flash, the building was actually quite dark. You can get a better feel for what it was like to be in there in the short video clip I’d shared on Twitter, with no camera flashes going off.

As bright as those pics turned out, this is what it looked like when the flash wasn’t going off. @P_Hendrickson @imprincessjones pic.twitter.com/31UwGhRlDK

While the setting itself was both heartbreaking and fascinating, nothing particularly creepy seemed to be happening while my partner-in-crime and I were there. It wasn’t until I went through the photos later that a few things caught my eye.

Now, I should say, as much as I believe in ghosts, I consider myself a skeptic. I believe most sightings can be explained logically rather than supernaturally. So I’m not saying these are anything special. Two of the three locations are probably just flukes. But the last one… well, that one I honestly can’t explain. It admittedly made me a bit uneasy when I found it.

This first shot was taken in a restroom. This is zoomed in to show you what caught my attention, so pardon the fuzziness. I zoomed in on the original to look at a large hole in the wall across the room. And what appeared to be a skull was looking back at me. Now, this one I suspect is just an optical illusion. But still, see if you can see what I did. 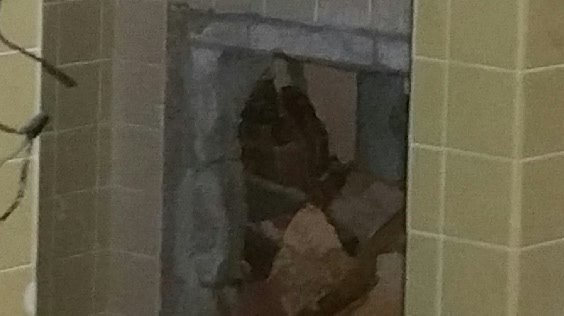 This next one I can’t quite explain. It’s a picture of a ceiling in what seems to be a hall. It’s also zoomed in a bit to show you the more interesting part (which my partner identified; I’d totally missed it).

The thing is, I don’t recall taking this photo — or any photos of ceilings. And neither of us can recall seeing anything like this strange black webbed material that almost looks like spreading tar, seeping down from above. It doesn’t look like typical mold growth. And it’s nothing like any paint found elsewhere in the building. I’m truly baffled.

A colleague said the webbed nature and the way it fades off looks organic, and with that I agree. But what caught my partner’s eye that night was the appearance of a  face looking down at us. Can you see what startled her? Again, I think there’s probably a natural explanation for this. And perhaps my camera went off without me meaning to take the shot (I do that all the time and catch weird things). But for the life of me, I can’t imagine what the explanation is just from the photo. 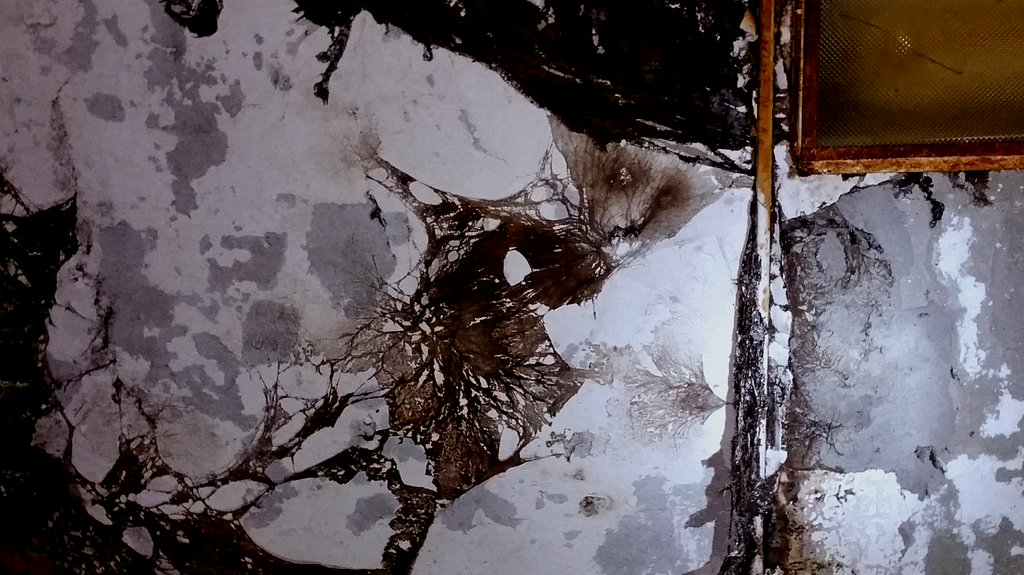 Now we get to the interesting shot(s). These ones left me with a bit of a chill. I only caught it on my third or fourth time through my collection of photos from that night. These were taken in the stairwell on our way exiting the building. I made it a point to photograph this area pretty thoroughly because when we arrived, we’d overheard a man saying he caught “evidence” of a ghost in that stairwell the last time he was around.

First, here’s an ordinary image of the stairwell, looking down from the second floor to where the staircase turns. The large window is higher than you probably imagine, so when thinking about size in these images, focus more on the banister’s height. 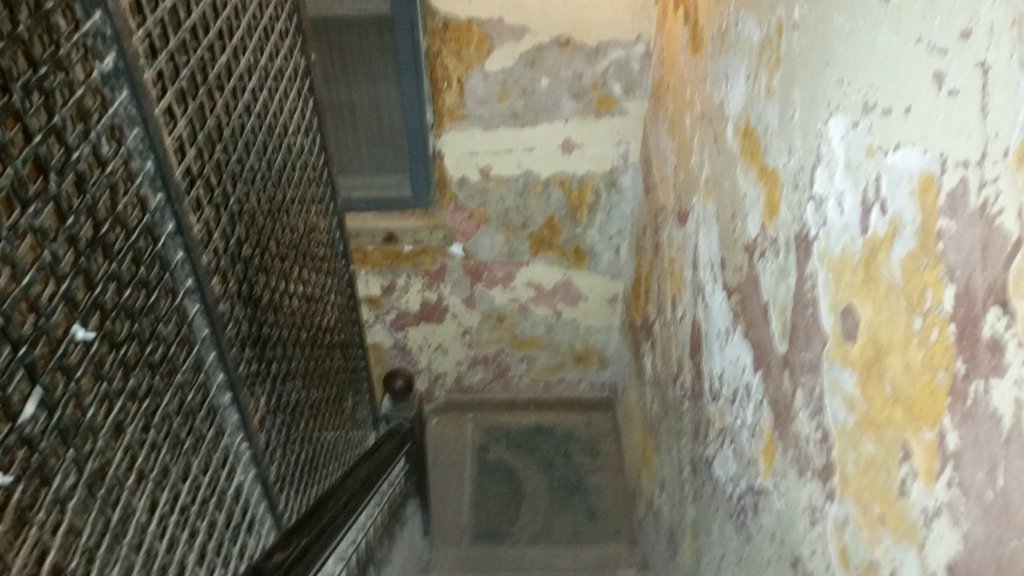 Also pay attention to the peeling paint patterns on the wall near the lower end of the railing. And remember this building housed children.

I should also note, I did not see what’s in the next photo with my naked eye at the time. And it’s important to know I am 100% certain there were no other people in this stairwell. It led to the exit, and was watched from outside so no one was coming in from there. And we made sure it was completely cleared out before photographing it.

Here’s what a second photo caught, taken mere seconds apart. The framing’s not quite the same and it picks up the lighting from above, but the paint patterns make them easy to compare side-by-side. 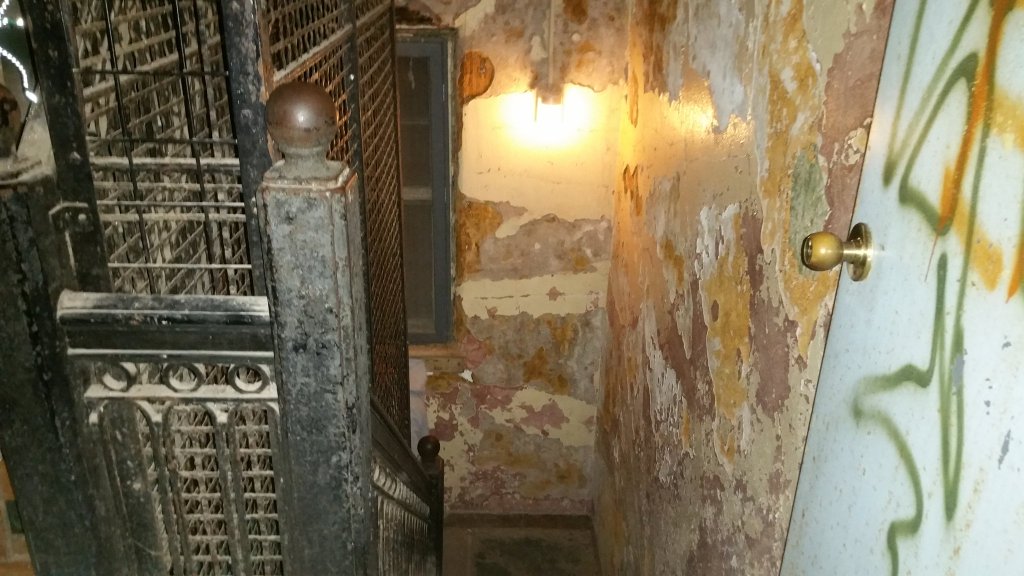 Do you see what I see standing at the bottom of those stairs? I see what looks like the hazy image of a little boy. It’s solid, yet not quite “human” if that makes sense, and it’s not simply part of the wall (the focus even seems quite different than anything else). It blocks the paint pattern behind it, and its “back” can be seen through the safety cage.

I’d place this at around five feet tall, give or take a couple of inches. And when I zoom in on the full resolution copy I can clearly make out a nose, chin, arm, and even a hairline. And again, there were absolutely no other people around these stairs.

I cannot explain this one. I didn’t expect to catch anything like this on our little ghost hunt (I’m not that lucky). But I’m blown away by it. The fact that someone else reported a similar experience on these very same stairs, the fact that others have reporting seeing ghosts of children dressed in white in this hall, the fact that this hall housed children in general (a room with an old ball still lying on the floor rests at the bottom of this stairwell even), the fact that the size of this figure is just right for that of a child, the fact that no clear camera faults would explain this particular phenomenon (it’s not just some sort of motion blur as many “ghost” shots look like), and the fact that neither of us saw anything physically there in that moment — I’m not sure what to think. But I do know it floored me when I found it on my camera. And I can’t wait to export the rest of my images and a few video clips to see if anything else interesting turns up on closer examination.

You don’t need me to throw story ideas at you with a setting like this. I think this abandoned hospital speaks for itself.