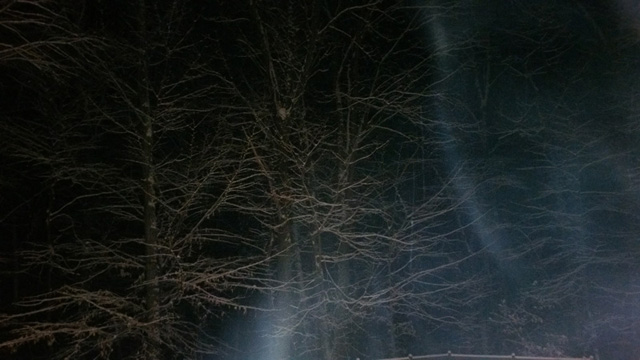 Today’s story setting inspiration photo is a bit different than the others. Instead of being focused on a certain place, its emphasis is on what could be right in front of your face without you even realizing it.

I took this photo shortly after a snow and ice storm. That doesn’t always stick to the trees for long with the kind of wind that pummels the community up on this hill. So I stepped outside to capture a few photos of the icy trees at night. Instead I captured what you see above.

Now when I saw that on my phone, I didn’t immediately think anything of it. It was a blur on my screen, so I took another few shots and went back inside.

When looking through the photos later, that’s when I got a little freaked out. This one looks like a head and shoulders lunging at me. Yet I saw nothing while taking the shot.

To put this in perspective, the next two shots were a bit strange too. In the second, the blurry-looking figure was gone, but a similar-colored streak of light was cutting through the trees. In the third, there was another blur, though much fainter. It’s tough to make out unless you’re seeing the full-resolution shot, but it looks almost like fingers reaching in front of the lens.

I should also note that there were absolutely no insects flying around the camera. In the dead of winter, especially when we’re in the middle of a freeze, there are no bugs flying about where I live. Spring? Sure. Fall? Sure. Summer? Abso-friggin-lutely (you wouldn’t believe some of the insane creatures living in the woods around here; plenty I never knew existed until moving here).

But winter? No. Not a one. It also wasn’t raining, snowing, sleeting, or anything like that when I went out for these shots. The fallen snow wasn’t blowing around either. So I have no idea what might have interfered with not one, but three, photos like that.

Despite the fact that I feel a bit uncomfortable when I look at this image, I suspect it was some trick of the camera. Or at least that’s what I’m going to tell myself.

But hey. Apparently I took these shots on my birthday. (Because, yes, I’m so exciting that I spent my birthday photographing the trees I see every damn day; though in my defense it was snowing all day, and it was a Tuesday, so what the hell else was I going to do?) So maybe it was my resident ghostie stopping by for a birthday visit. You never know!

Back to business. How might an odd trick of the camera like this inspire a horror story setting? Easy. Imagine taking the horror with you everywhere you go. Imagine potentially being surrounded by spirits or some other type of entity, and you can only see them through the lens of your camera. Me? I’d destroy the f*cking camera. You? I bet you could come up with a story around that.