I’d like to talk a little bit about the background of my first horror novel today. On its most basic level, it’s a ghost story — based on an urban legend from my college town, but a ghost story nonetheless.

Ghost stories appeal to me in large part due to their plausibility (at least in the eyes of some readers). After all, I can’t say I know a single person who truly believes in vampires, werewolves, or zombies roaming the earth. But many people do believe in ghosts. It puts them almost on the same level as the serial killer — a monster we know exists.

A Sucker for a Good Ghost Story

If you had asked me a year ago if I believed in ghosts, I either would have shrugged off your question (not something I’d thought much about) or I’d have told you “no.” Anything else would have felt silly. After all, ghost stories were just things I’ve read since I was a kid. (I used to curl up in the basement children’s library reading ghost stories all summer long — a children’s library that’s supposedly haunted itself, as I found out more recently.)

While I was a sucker for a good ghost story most of my life, they were just that — stories. Until this past year. Now if you ask me if I believe in ghosts, I have to admit I do. In fact, I’d tell you the house I live in is haunted.

It all started with noises in the house when I was home alone (which I am all day because I work here). I have four cats who roam freely, so when I started hearing noise above my office, I just shrugged it off. But one day the noises were louder. And they were very distinctly human footsteps. *Thump, thump, thump* in perfect rhythm.

The room above my own office is a spare-bedroom-turned-office. I convinced myself it was just the cats, and I went upstairs to kick them out of the room. But the room’s door was shut. Three of the cats were sleeping on the landing at the top of the stairs. And the other I already knew was downstairs with me. No one, and nothing, was in that room. That’s happened at least a dozen times in the past several months.

What really freaked me out though was that it went beyond hearing things. On three different occasions I saw something that wasn’t there — or at least something that shouldn’t have been. In each case, someone else was in the house with me. And in each case, I caught a glimpse of someone walking by.

The first time I could even tell they were wearing a yellow shirt. I just assumed it was the other person in the house, so I started to have a conversation. They ignored me. I got annoyed and went to the other room to get their attention (the figure walked to the far side of the living room, and there is no way out other than passing by me again). No one was there.

The second time I was in the kitchen. You can see the stairs from there. And I saw a shadow-like form move up them (the size of a person). I assumed the other person at home just went up the stairs and I was seeing their shadow behind them. Again, I started talking to them. And no answer. Less than a minute later they came up the basement stairs (instead of being on the second floor where I thought I’d seen them go). That time scared me more than the first, because it wasn’t just a one-time thing I could brush off.

The third time it happened, it was also in human-like shadow form. But this time the other person in the house was standing right next to me. I saw it and freaked out a little bit. The figure walked past the hallway we were standing in, towards my office door. I wouldn’t go back into the room without them walking me there.

Getting to Know My Ghost

I already knew someone had died in the house, so I had no doubt about who the “presence” might be. The previous owner’s first wife died of cancer, and we found out from neighbors that she chose to come home to pass. She loved this house. So I know there’s no reason for me to be afraid. And normally I’m not. I even yell at her to be quiet when I’m working and I hear steps from the room above, and things quickly settle down. And in exchange for her cooperating with my work schedule, I try to keep the house up (especially the rooms I know she worked on personally — like continuing to upgrade them just as she did). And I make sure I plant yellow flowers in the gardens. A neighbor tells me they were her favorites.

That said, it’s still a little bit unnerving when I see things that I can’t explain. And it means I’m going to be that much more cautious about moving into another house down the road. This one certainly isn’t your typical “haunted house.” It’s less than 20 years old and only on its second owner.

Living in what I’d consider a haunted house isn’t why I like to read (and write) ghost stories. But it makes me think about them in a different way, and I can connect to my characters by understanding what it feels like to see something that shouldn’t exist. When we watch horror films and yell at the stupid character who chases after a noise instead of running away… I get that. I understand that line between fear and disbelief where your instinct to understand something can be stronger than your instinct to run. And I hope in the end I’ll be a better writer for it.

So what about you? Do you believe in ghosts? If so, is that belief based on some personal experience you’ve had? Or do you simply enjoy a good ghost story and the lure of the unknown? Share your thoughts with me in the comments.

I was talking to a friend and colleague the other day, and she reminded me that this story of the likely-haunted house I live in didn’t stop when I wrote this post. Here’s what happened through the rest of this year.

Over the summer there was an issue that caused me to relocate my home office to another room. This room has a wall of built-in bookcases that sit above a row of cabinets (you can see my office below to see what I mean). 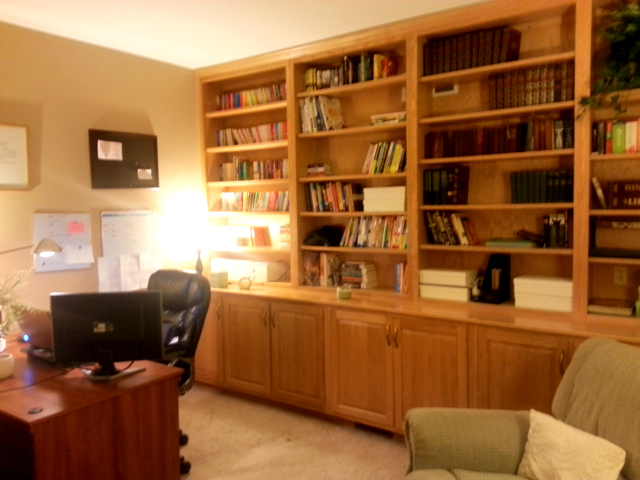 One day while I was working in this room, back to the built-ins, I heard one of the cabinet doors open and close a few times — like it would normally sound if one of my cats was playing with the door. I didn’t think much of it. But it started again. It was louder and more persistent.

I turned around, and there was the door opening an inch or two and banging shut again. One of my cats (the usual culprit) was sitting there watching it. But she was much too far to be making the racket herself.

It still didn’t phase me much. I assumed one of the other cats got themselves stuck in there and they were bumping it while moving around or trying to get out. They love to trap each other in rooms and such, so it wouldn’t surprise me. I opened the door and looked in, calling a cat.

But there was no cat.

I got down on my hands and knees and started digging through things in the cabinet just to make sure I didn’t miss anything and shut a cat back in there. But nothing. I heard the door myself. I saw the door myself. But there wasn’t anything there to cause it. Still not wanting to think anything strange was going on, I emptied the cabinet completely. I figured maybe a field mouse got into the walls and burrowed a hole to the cabinet. But no. Things were flawless inside.

This happened again. And it got to the point where I was uncomfortable being in there. So one day I just started digging through the built-ins. I found something.

In the cabinet section right next to the one that was banging (which was immediately behind my desk, and the one most likely to get my attention), I found an old drive from a camera. It was too old to open with a modern card reader, so I ordered one that could do the job, curiosity and all that.

It turns out the drive was filled with photos of the old owner — the husband, the wife who had passed in the house, and their daughter (who was probably around 10 at the time). It showed them visiting Disney World and during a birthday party for the daughter. So, feeling like I was led to that for a reason, I tried to contact the old owner. The only one I could find contact info for was their son. I offered to send the drive and reader to him to pass along to his sister. But unfortunately I still haven’t heard back.

The funny thing? Nearly all of the “ghost” incidents here stopped as soon as I contacted the son. So take it for what it’s worth. Maybe you have another explanation in mind. But knowing what I’ve seen and heard, I suspect the woman who died here wanted her family to have those memories that somehow got left behind, buried at the back of a cabinet. And as long as I’m living here, I’ll hold onto that drive for her and keep it safe in case someone from the family does decide to respond.