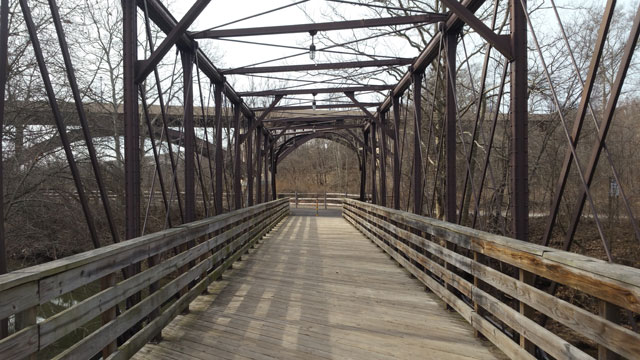 For this week’s horror story setting inspiration, let’s look at a bridge I visited while scouting potential body dump locations. (Why do I seem to know so many places that would be good for that?) One of my cousins recommended this place, and it was a gold mine — the other photos to come in a later post.

I met up with a colleague at my favorite Irish pub one afternoon. And little did I know this gem of a location was barely a block away. Tucked behind a gorgeous old brick building is this bridge — the start of a surprisingly-secluded walking and biking trail along the river.

A weekday afternoon was the perfect time to go too. I only ran into one other person the entire time. I was actually a bit creeped out by how deserted it was, though that was largely due to the less-than-savory area underneath the overpass. Today let’s focus on the bridge itself. 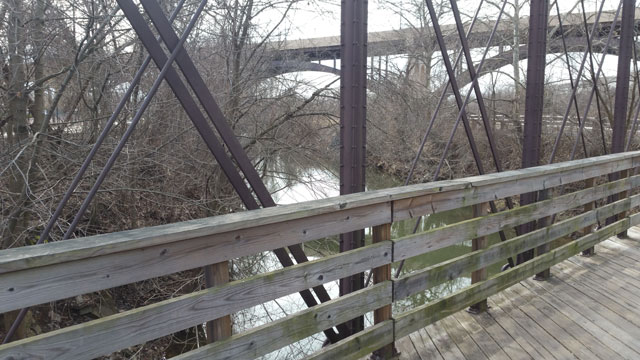 The first thing that struck me about this bridge is how climbable it is. It seemed strange that the town would commission something that looks like such an obvious disaster waiting to happen.

I have to admit. I’m still a bit of a kid at heart. I desperately wanted to climb the thing like a friggin’ monkey. But sadly my more mature self wouldn’t allow that without at least having a spotter to call for help should I stupidly fall and break my neck or end up in the river.

That alone could be a lead-in to a story: Stupid teenagers out partying under the overpass decide to climb to the upper beams of the bridge on their way out. Maybe one slips and dies and haunts the bridge. Or, better yet, this bridge is practically built for a hanging. So maybe there was a prior suicide there and that ghost haunts the area, going after said stupid drunk-ass kids messing around on the bridge.

A bit cliché? Yeah. But I’m sure you can come up with something better. I have more important things to do — like figuring out who’s just crazy enough to go play on a bridge with me.