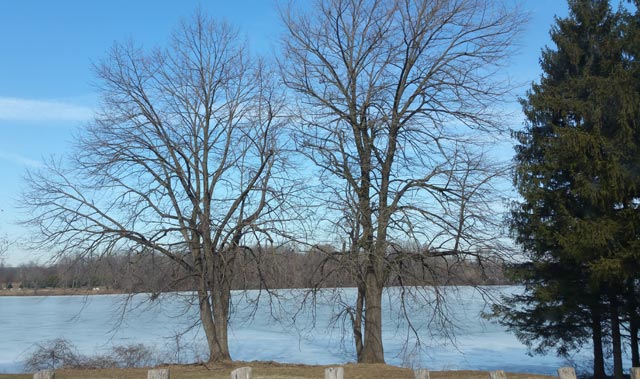 For the latest story setting inspiration photo, I took a shot of a local reservoir, Lake Ontelaunee, back in February. It was an odd day to say the least. The temperature was heading into the mid-60s, like an early Spring day. Yet the reservoir was still frozen over from the recent cold.

As I was driving by, I saw a couple of ice fisherman standing on the frozen lake. I’d actually never seen it frozen over this completely, and that plus the warm weather made it a surprising sight. I decided to pull over in one of the lots and snap a few photos, figuring the ice wouldn’t last long.

I was right about that. By the time I made my way home later that afternoon, nearly the entire ice sheet had melted.

How might this kind of setting inspire a story in the horror genre? Here are a few possibilities that came to mind:

It’s a bit strange for me to share this because Ontelaunee is where I like to go to clear my head — sitting along the reservoir edge admiring the trees in the fall (it’s gorgeous) or just driving around the huge lake (far exceeds what you see in the photo). Even knowing its history I never would have imagined anything sinister. Maybe I’ll think about it a bit differently the next time I’m there.